Every Leader Tells a Story | Fast Company by Elizabeth Weil is an article from 1998 that stuck with me because it was the first article I had seen that connected leadership and story telling.  The best leaders uses stories to communicate — stories communicate so much about culture and priorities.  The stories and folklore of a company define the norms and expectations.  It was a long time ago that I first saw this article and I still remember some of the stories from it, even without re-reading it.

There are several great stories in Elizabeth’s article.  One from HP, is the story of Bill Hewitt opening a locked supply closet with bolt-cutters and pinning a note saying “Don’t ever lock this door again.”  Its a great story for a number of reasons, not the least of which is it communicates Hewitt’s trust in HP’s employees.  Stories are great for communicating the unwritten rules in any organization.  Stories of people working all night on a software conversion, or making extraordinary efforts to deliver on promises shape a company’s culture.  Elizabeth notes that the concept of storytelling’s power is not an earth-shattering breakthrough; still I credit Elizabeth with being the first person I recall writing about the power of storytelling in a business or commercial setting.  If you know of others who have written about storytelling prior to Elizabeth’s article in 1998, please let me know.  It would be a great story.

One more anecdote that I always remember from Elizabeth’s article.

Once upon a time, there was a man named Patrick Kelly, who started a company called Physician Sales & Service (PSS). Pat loved to tell stories at work. He told stories about growing up in the Virginia Home for Boys. He told stories about fighting in Vietnam. But his favorite story involved PSS’s battles with a bank in Jacksonville, Florida, where the company is headquartered. It seems that in the early days, PSS was growing too fast for its own good. Or so the bankers said. The company kept exceeding its available lines of credit, and banks kept rejecting its loan applications. But this bank actually called a loan – which forced PSS to raise equity from its employees.

Somehow, a few years later, a charming loan officer managed to lure Kelly back to the bank. But soon PSS was receiving the same treatment as before. It got bigger, so the bank got nervous – and eventually reneged on the loan. That’s when Kelly vowed to his staff, We’re going to bury that bank.

So he ordered a casket and a headstone. He assembled every loan agreement he’d ever signed with the bank, plus every gift (every golf ball, every mug) he’d ever gotten from it. He placed the artifacts in the casket, dug a grave in his backyard, and invited his PSS colleagues to a funeral. Afterward, one staffer asked a question: “Pat, it’s such a beautiful day, why didn’t we get in your boat and have a burial at sea?” Kelly’s reply: “You never know when I might have to dig up that casket and kiss that bank’s ass again.”

PSS employees chuckle whenever their CEO tells this story. And they learn, or relearn, an important lesson: No matter how badly other people treat you, no matter how confident you get about your future, never burn your bridges. The power of this story inside PSS also offers a lesson about leadership itself: In the new world of business, where it’s every executive’s job to make sense of a fast-changing environment, storytelling is the ultimate leadership tool.

“Leadership is about change,” says Noel M. Tichy, a professor at the University of Michigan Business School and the coauthor of The Leadership Engine (HarperBusiness, 1997). “It’s about taking people from where they are now to where they need to be. The best way to get people to venture into unknown terrain is to make it desirable by taking them there in their imaginations.”

In other words, by telling them stories. 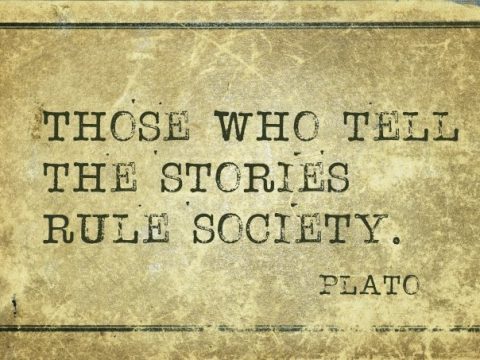