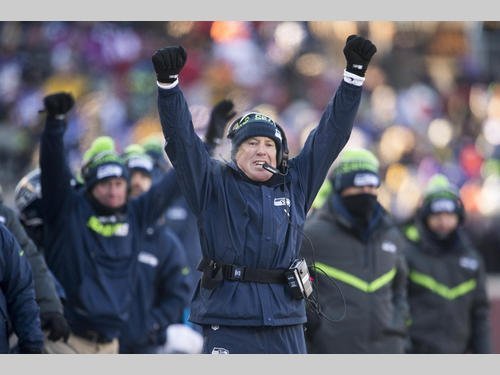 From The Seattle Times, Jayson Jenks talks about Angela Duckworth’s visit with the Seattle Seahawks and their coach Pete Carroll.  Pete had watched Angela’s talk about grit and had felt strongly that grit could be taught, while Angela was less certain.  Pete contacted Angela and she spent a day with Pete and the Seahawks.  Jayson writes:

Less than two years ago, Angela Duckworth had spoken in less-certain terms about the importance of culture in relation to grit.

“My sense is that great coaches are able to create, to forge, a team or group identity that says, ‘This is the kind of person we want. This is what it means to be on this team,’ ” she said at the time.

But Duckworth’s day with the Seahawks allowed her to witness Carroll up close. She went to meetings, talked with players and scouts and traversed through the team’s gigantic facility.

“I had this intuition before I got on the plane, but it really drove it home: A lot of grit comes from the culture that you’re in,” she said. “So if you end up in a culture where other people are gritty, the leader is gritty, the leader is incredibly demanding and yet, at the same time, incredibly supportive, you’re going to be grittier than you would be in a place that didn’t have those features.”

The word culture gets thrown around a lot in sports, but Duckworth has an interesting perspective. She is not a sports fan. She is an outsider, and that distant vantage point allowed her to observe Carroll and the Seahawks through a broader academic lens.

“It’s a very strong culture; it’s palpable,” she said. “And they have all the features that cultures have. They have a common language, they have words that are understood in the group that can be easily misunderstood outside of the group. Like when Pete says, ‘Always compete,’ and then has that particular definition of compete. ‘It’s not about beating the other person but being your best self.’ In a way you’re like, ‘Why would he say that?’

“But that’s what cultures do. They create phrases and traditions that are understood by the ‘in’ group and usually misunderstood and not practiced by the ‘out’ group. Cultures usually have a history and a narrative: ‘This is who we are and what makes us different.’ They refer to themselves as categorically different. They’re not just football players, they’re Seahawks.”